I walked away from the customs building to the waiting car with my passport stamped and precariously slipped into the back pocket of my jeans, the driver was waiting patiently smoking a cigarette, legs crossed and leaning against the bonnet of the taxi, mafi musklia he asked me tossing his cigarette away and getting in the car, mafi musklia I lied as I took my place in the back, the car pulled out and headed towards the Jordanian side of the Syrian border, the heart wrenching sound of war was a hundred kilometers behind me now but for some reason I didn’t feel any sense of relief.
The journey to the border had begun with the ground shuddering sound of heavy artillery, launched from a position behind us, the taxi drivers had grown accustomed to the sound but the waiting passengers would all flinch with each boom, we could all see the plumes of black smoke rising from the suburbs of Damascus below us, few people commented, four of us bundled into the car and we set off, a trip I had made many times before but now the landscape had changed, everything had changed, lives ripped apart by war, tanks wedged into narrow streets ,the wreckage and rubble of people’s homes lay all around, I had listened to the sounds of this carnage day after day and now faced with it I was consumed with sadness, nobody spoke in the car, everyone but me smoked.
The road to the border was just a series of checkpoints, for the most part only cursory checks and searches and for me no questions but two of the passengers didn’t make it passed the last checkpoint; they didn’t look very surprised as we left them standing at the side of the road their cheap black hold-all’s being searched by two Syrian army privates.
As the car sped through the monochrome landscape of Jordan I contemplated the problem I had not mentioned to the taxi driver, in my passport was a valid stamp that would allow me to return to Syria but the immigration police had retained my residency card, I had argued long and hard but they insisted new regulations meant they would send it to Damascus and I could collect it when I return.
After a year of war and no work I was heading to Jordan and Egypt to try and drum up some work, my financial situation was now serious and the trip was an investment, it was to prove more costly than I had anticipated. 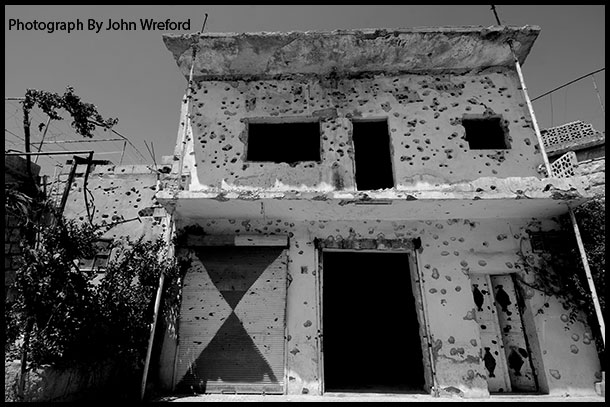 19 replies to Damascus the Beginning of the End (pt1)