Faisal was the first Syrian friend I made on my first ever visit, he was also the first friend I lost in the war; I made many more friends and lost more too.

My first visit to Syria must be some twenty years ago now, only my diaries lost in my Mothers cavernous loft have the details, so much of my memory is draped in the dust of time but that day is still clear to me.

I walked over the old stone bridge spanning the al Assi River, the Norias grinding on the far bank, I spotted a sandwich shop, more a kiosk really, I treated the young man behind the counter to my recently learned Arabic greeting, he smiled as he replied, he prepared my sandwich and we both sat on plastic chairs and became friends, he told me some years later the reason he had taken to me was my fumbling Arabic.

Hama had been the city that first garnered my attention in Syria, I had only recently learned of its bloody history and no sooner had I arrived in Damascus I set out to visit, qualified advice being whatever you do, don’t mention the war, but obviously I am not one for following advice as regular readers of these pages will no doubt be aware.

Hama had suffered a brutal crackdown in the political unrest in the 1980s, half the city was raised and tens of thousands were killed, the city like many in Syria is multi faith but the Muslin brotherhood and conservative Islam were synonymous, prior to the uprising in 2011 most political analysts had declared the Syrian government to have crushed the Ikwan (MB).

I asked Faisal as we sipped tea where he learned his English, he told me he had learned while in prison as a child; he showed me a crumpled photograph of his house before it was destroyed, it was a matter of fact conversation, not angry or melodramatic although he sighed somewhat tiredly as he remembered the death of his horse, even my horse he said shaking his head.

I joined him and a group of his friends again that night, in fact for the next few days I would spend the nights chatting until the early hours, walking the quiet cobbled streets, empty accept shadows, under antique arches and past the Automan Hamam, on more than one occasion getting back to find my hotel locked up, I learned a lot in those few days and acquired an affection for Hama that has never left me.

Over the years I would drop by Hama and visit my friend, when we sat together late at night our conversations were always about the injustice of political power, and not just his own, elected or not the abuse of power that punished the weak or poor, when I visited with Friends then it was just his whole hearted hospitality.

Faisal was a good friend and was always there to help when I needed it, my early days in Syria especially, on one occasion I had asked his recommendation for a restaurant to entertain a visiting friend, I took his suggestion and enjoyed a beautiful Syrian meal beside the banks of the Orontes River, when the cheque was ordered the waiter said the bill had been taken care of.

We came from very different backgrounds and lead very different lives yet became very good friends, I don’t know the exact details of his death, as was very common in the early days of the Syrian uprising his death was shared on Facebook, despite the utter sadness I felt, still feel, it did not come as a shock, he was prepared to stand up for what he believed in, and for that bravery he paid with his life. 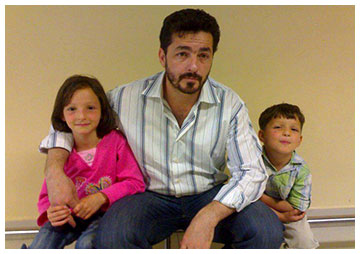 31 replies to Sadness in Syria, Hama.